Showing posts from May, 2009
Show all

3 weekends ago, I hauled all my stuff to my friend's place on the base and we had a yard sale. When that was over, I grabbed the two laundry baskets of things I figured I could still sell and dumped the rest on the poor folks at Value Village. Apparently they were expecting me, because they had a designated drop-off point at the back of the store with two real-live attendants to help me purge my junk. The other stuff got listed on our local free classified site, and I sold one exersaucer and five stamp sets. To date, I have made $190.

Yesterday, after getting almost all the vegetables we've started into the ground, I removed the Captain's grow operation out of our bedroom forever. Rosemary's Baby is finally past the point where he wants to dump the soil every which way, so next year it can go in a hallway somewhere. So, the big, ugly work table covered in foil, with grow lights hanging from every available surface is now out in t…
1 comment
Read more 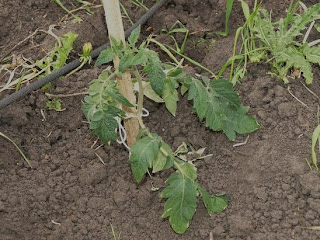 If I had my way, the Captain--who loves his garden more than he loves me, Rusty and Jerome combined--would take care of all the tilling, planting, weeding and watering until August, and then I'd come out and pick all the perfectly-formed vegetables for salads and canning and freezing for the winter.

Unfortunately, the military schedule doesn't really allow for that, so some years, I end up doing the vast majority of it myself, usually taking care of it all after the kids are in bed because those are my only free hours. And sometimes--I admit--I complain bitterly.
I was lucky this year. The Captain just happened to be home long enough to start the seeds, prepare the soil, deal with the first batch of weeds and plant some of the hardier vegetables, as well as setting up the irrigation system. I've spent this week putting in the rest. And I'm far from done.
Our garden plot is so big that if it were any bigger, we'd probably have to declare ourselves farmers on our incom…
Post a Comment
Read more 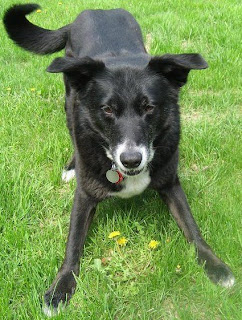 Years ago, I worked with a gym teacher. She was the mother of two teenagers who kept bringing home stray animals, and she'd inevitably end up being the one to look after these new family members for the rest of their natural lives. One morning, she told me she was really looking forward to when all the pets finally died.
At the time, I just had Rusty and Jerome and I loved them like they were my own children. So, while I found this statement funny, I also found it horrifying. But these days I can kind of see where she was coming from.
The Captain and I took the dogs to the vet last week. Usually I have to do this job on my own, or wait until my parents are coming for a visit so I have an extra pair of hands to help. I have to schedule the trip for when both kids are at school or can be babysat. With two large, boisterous dogs, it can be quite a job. The last time I left Jerome, my overzealous border collie, alone in the car while Rusty reluctantly got her shots (bringing them in tog…
1 comment
Read more

My Inner Rebellious Teenager is Alive and Kicking! 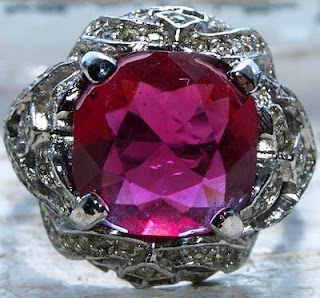 Firstborn had a dental appointment in Booming Metropolis this morning (no cavities!). So naturally, afterwards we ran a few errands before heading home again.

For the most part, the errand-running was uneventful, unless you count Wal Mart running out of fig newtons as noteworthy. But when we dropped off a donation bag at Value Village and grabbed the opportunity to do a little treasure-hunting, all that changed.
As I was passing the jewellery counter, a large piece of cheap-and-cheerful costume jewellery caught my eye. It was a ring with a big pink stone and some little crystals surrounding it. Not everyone's cup of tea, I admit, but I like a chunky cocktail ring and I'm not apologizing. There was no one there to pull it out from under the glass, so I made a mental note to swing back around when I was done browsing.
After picking Firstborn up a pair of pants and a VHS copy of The Empire Strikes Back (we have this movie on my still-missing, still-broken laptop, but he insisted th…
2 comments
Read more 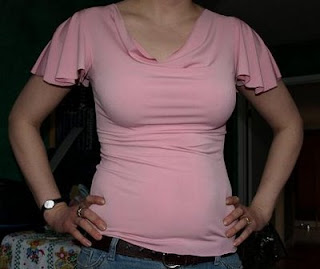 My brain's been working overtime. Not that that's a bad thing. Since becoming a stay-at-home mom, there have been moments when I've wondered if it's even still there.
Last night we decided to connect with the outside world and actually turn on the TV. We are still under the mistaken impression we can survive indefinitely without cable, so we have our rabbit ears and 2 static-ridden channels to choose from.
Last night, we chose CBC. And in a shocking stroke of luck, the home of such stink-o-saurs as Sophie was showing The Pink Panther. I haven't seen this film since I was about seven, and I have to say, I got a lot more out of it at 35. It was absurdly funny, and Robert Wagner was so adorable that it's almost impossible to believe that he spent almost another half-century afterwards becoming MORE adorable! But enough about that. For now.
What has thrown me right off is what my brain started doing just a few minutes into the movie. You know when you hear a musician…
1 comment
Read more 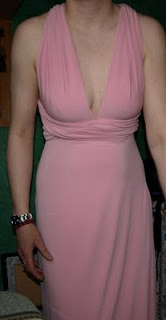 My apologies for the gratuitous boob shot, but this was the best picture I could get of my new dress. I need to get one of those dressmaker's dummies (anything with the word dummy in it was MADE for me!) to avoid these horrors. But anyhow, today I am a designer!

I was wasting time ogling other people's creations on Burda and I noticed a whole lot of contributors have made something called an "infinity dress". So I did some research and discovered that this is one of those dresses you could buy at places like Sears and all sorts of mall clothing stores a year or two back that converted itself via the straps so it could be worn several ways, for several looks. If I recall correctly, these dresses went for something outrageous like $60 or $80. And seeing so many people having success with this, I set out to make one of my own. It seemed so simple (and believe me, a monkey could've whipped this thing up--there are about four pieces to it), I decided to try making it w…
1 comment
Read more

The Mother of all Yard Sales

May 10, 2009
I did have a shot of the card I made my mom this year, but of course, it's on my broken computer, which I still haven't gotten back two weeks after telling them just to get it back to me and I'll fix it myself. I'd better call them about that on Monday.
This weekend, I hauled a couple of loads of baby stuff to my friend`s place on base and we had a yard sale. While I`m a seasoned buyer at these things, it was my first attempt at selling my own junk. My parents (who have enough stuff to host a garage sale EVERY WEEKEND) don`t like the idea of strangers rummaging through their junk, and that thought has kind of stuck with me through the years.
Admittedly, there were a few minor annoyances that alerted me to the fact that the human race does, indeed, have some serious problems. For those of you new to scouring yard sales, bartering over something that is marked at 25 cents is seriously not worth the 3 seconds you lose in the haggling. But all-in-all the whole thing was an e…
Post a Comment
Read more

May 08, 2009
Dear Economy,
Feel free to bounce back any time now. Just because my husband is a public servant, it doesn't mean I'm not affected. I have a whole lot of family and friends out there stressing and suffering over this situation. So, come on! Boom again! Or at least bang! I think we'd all settle for a mild pop at this point. No one likes a show-off anyway.
Best Regards,
Someone who never thought she'd be nostalgic for the 80's.


Dear Swine Flu,
Please go away now. Every time my kid coughs, I want to call 911. If he gets a fever, I'm consulting the internet to calm myself with the suggestion that it's probably just dysentery. You're making me crazy, and frankly, I don't need any extra help.
Yours Truly,
A 35 year-old with granny hands


Dear Kiefer Sutherland,
You're dreamy. Soooo dreamy. But this drunk-driving/headbutting business has got to stop. If it doesn't, you're going to start looking your age, and that won't be good for any of us. Speakin…
1 comment
Read more 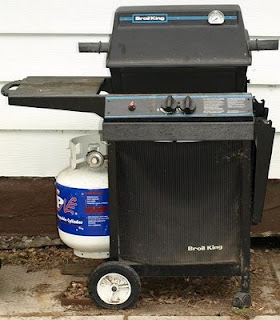 As you may be sick of hearing, military life offers me many opportunities for personal growth.

Last week, I lived through the crazy onslaught of bad luck with non-working computers, broken plumbing and unsettled digestive systems. My one awesome customer service experience turned out to be almost as bad as everything else. Our broken satellite radio, it turned out, was exhanged for an inferior model. I won't die from the inconvenience, but with no Artist Alert feature, I'm needlessly missing out on a lot of Foreigner. I know, I know. Call Lifetime. Someone should be making a weepy made-for-tv movie based on my life.
But I digress...
Over the past few years, I've had a baby by myself, orchestrated several moves on my own, learned to use the riding mower and the weed whacker, dealt with car troubles, house troubles and technology troubles, and nursed myself and my kids through numerous battles with illness, sadness and separation anxiety. None of this was fun, but all of it was…
1 comment
Read more

Does anyone else out there think they look better in glasses?
I have been wearing my specs now since I was 15, so that's 20 years of four-eyed nerdery. And honestly, I think I look more agreeable in them than not.
Case in point: back when I taught third grade, I was sitting at the carpet with my students at the end of a long day and one of them asked me to take off my glasses so they could see what I looked like without them. I did, and there was dead silence for a full minute. Then, as only a child can, one little girl piped up with a pure and honest response.
"You look plain."
I appreciated this genuine reaction because, really, I knew it all along. My glasses have somehow, after all these years, become a part of my face. Granted, I see myself in the mirror every day for at least a few minutes without them and I can still recognize myself, but they're almost like makeup now. I wouldn't go out of the house without them.
A few years back, I tried contacts. Sister #1 h…
Post a Comment
Read more
More posts