September 20, 2013
Well, it seems I'm down to posting here only when someone has a birthday, so maybe just expect to hear from me four times a year now.

I'm kidding! I have so much to share, I don't know where to start. I just need an extra six hours in my day, and I'll be right back to daily blogging!

But onto the main point. Today is Firstborn's tenth birthday. TEN! Where does the time go? If life carries on at this pace, I'll be dead in no time! 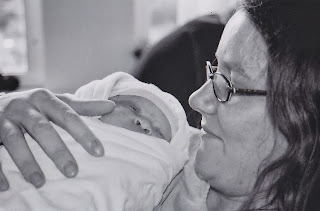 Here we are minutes after he was born. Notice the Captain is nowhere to be found. He was somewhere far away having fun with the army. So for those first few months, it was me and Firstborn against the world. 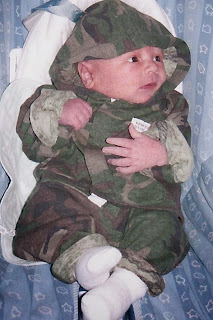 As you can see, his wayward father did not go completely ignored in all of this. My mother made Firstborn his very own army uniform, complete with an ID patch on the jacket. I believe his rank was "QT Cadet". Whatever else you might say about my mother, she knows her military hierarchy. 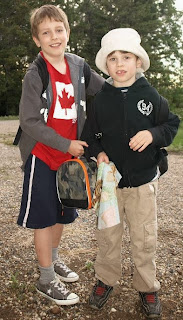 Flash forward a decade, and here he is a couple of weeks ago waiting for the school bus with his brother on the first day back. So grown up! I wonder what he'd say if I showed up at school now and called him my little QT Cadet. I'm going to go out on a limb and predict that it wouldn't be anything I could repeat here...

So tonight, we're having cheesecake (his choice, of course. Chip off the old block!) and I'm letting him stay up late so we can watch Blade Runner together. If you find it amazing that someone as youthful as me has a ten year-old, get ready for an even bigger shocker. I've never seen this movie! Apparently, I've been living under a rock...

Have a great weekend, blog buddies!

Glenda said…
Oh the years pass so fast. My one and only daughter is now 40 and I'm definitely "over the hill". Now time has kicked into overdrive and weeks fly past me like hours used to. Savor your youth while you can cause old age is not what it's cracked up to be! Hehehe.....Mother nature certainly has a sense of humor!
September 20, 2013 at 5:30 AM

Popular posts from this blog 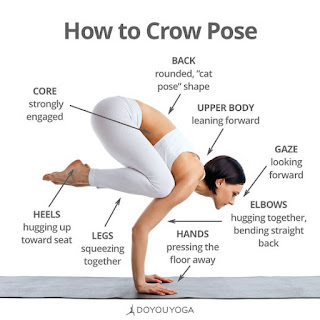 Are blogs even a thing anymore? Let’s find out!
A couple of times a week, I think about this abandoned blog. I didn’t simply forget about it one day and leave it behind. I just couldn’t quite get the posts right anymore. It took a while for me to realize that the blog and my life have outgrown each other, and if things are to ever move forward, one of us is going to have to change.
The bad news is that I can’t go back to having toddlers. And there is not a sad enough emoji in existence to express how I feel about that one.
Once I could talk about two year-olds smearing poop on the walls, playing soccer naked, and generally being hilarious. Now I have teenagers. And anyone who was ever a teenager knows that it’s not cool to violate their privacy all over the internet, whether anyone’s reading or not. And besides, teenagers aren’t hilarious. They’re horrifying.
So, just like in real life, I’m going to have to switch gears here and focus on me. I’m burning this thing to the ground and risin…
Read more 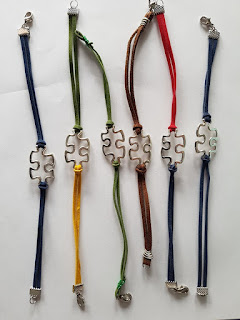 I've been active (if you could really call it that) with my local autism support group for a couple of years now. I am technically listed on the executive board as "Secretary". The fact that I had to type that word using two fingers is a little ironic. And I have done nothing remotely involving paperwork since I started with the group, nor do I dare touch any of the finances. My role has actually been a little closer to "Chief Crafter", occasionally dragging my eldest, tech-iest child along for some help with tasks that involve the computer.

As today is World Autism Awareness Day, and as I'm already starting to backslide on my blog, I thought I'd share a few of the crafts I've come up with to hopefully sell at our local fundraising walk this summer. Most of these can be made with less than a buck's worth of dollar store or ebay items. The most expensive item (the bookmark) still comes in at well under $2. 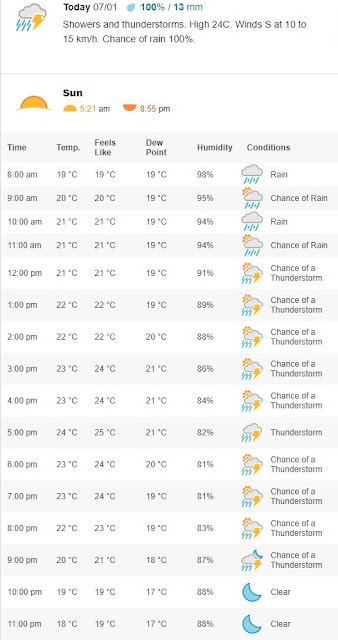 Well, I've already started to backslide on my blog. But what can I say? Those last couple of weeks of school are CRAZY! I have an iron or two in the fire that I'm hoping to share in the coming weeks. In the meantime, Canada celebrates its 150th birthday today!

We contemplated celebrating our first Canada Day in the area by going downtown and checking out the festivities, but as it's such a big one, and as we'd be dragging along an autistic tween with crowd and noise issues, and a surly teenager with embarrassing parent issues, it seemed like more of a punishment for us than a celebration. So we decided to stick to the activities available to us in the immediate vicinity, which are actually plentiful and impressive.

You know what else is plentiful and impressive? The RAIN we're getting this grey, miserable Canada Day! Here's a look at an hour-by-hour forecast of what we're in for today:


Universe, strike me down now! It's Canada's 150th birthday, and …
Read more